It appreciated by 0.04 percent against the USD and closed at Rs. 213.90 after gaining eight paisas in the interbank market today. The local unit quoted an intra-day high of Rs. 211.75 against the USD during today’s open market session

The rupee closed in green against the dollar for the eleventh consecutive day today despite the government’s decision to increase the price of petrol despite a decrease in oil prices in the international market.

Overall, the local unit has continued to defy bearish sentiments and was named the best performing currency in the world in August, with an 11 percent gain versus the US dollar, the most among all currencies. With this, the PKR has recovered a massive Rs. 26.08 in the last 11 trading sessions since hitting its all-time low of Rs. 239.94 in end-July.

Commenting on the development on Twitter, Topline CEO Mohammad Sohail tweeted, “After months of economic and political uncertainties, happy to see #Pakistan Rupee and Stock Market being Top Performers so far in August beating all other countries based on Bloomberg data. PKR is up 11% while KSE100 Index up 22% in US$”.

The rupee’s recovery can also be attributed to Saudi Arabia’s rollover of a $3 billion soft credit. The loan from the kingdom’s quota would be different from the restart of Pakistan’s $7 billion IMF bailout. On August 29, 2022, the IMF executive board is expected to authorize the disbursement of the next tranche of $1.17 billion.

Globally, oil prices continued to remain bearish and stayed below $95 as disappointing economic data from top crude importer China resurrected concerns of a global recession, and the world contemplated the expected results of the talks on a reviving deal that could allow more Iranian oil exports in the near term. 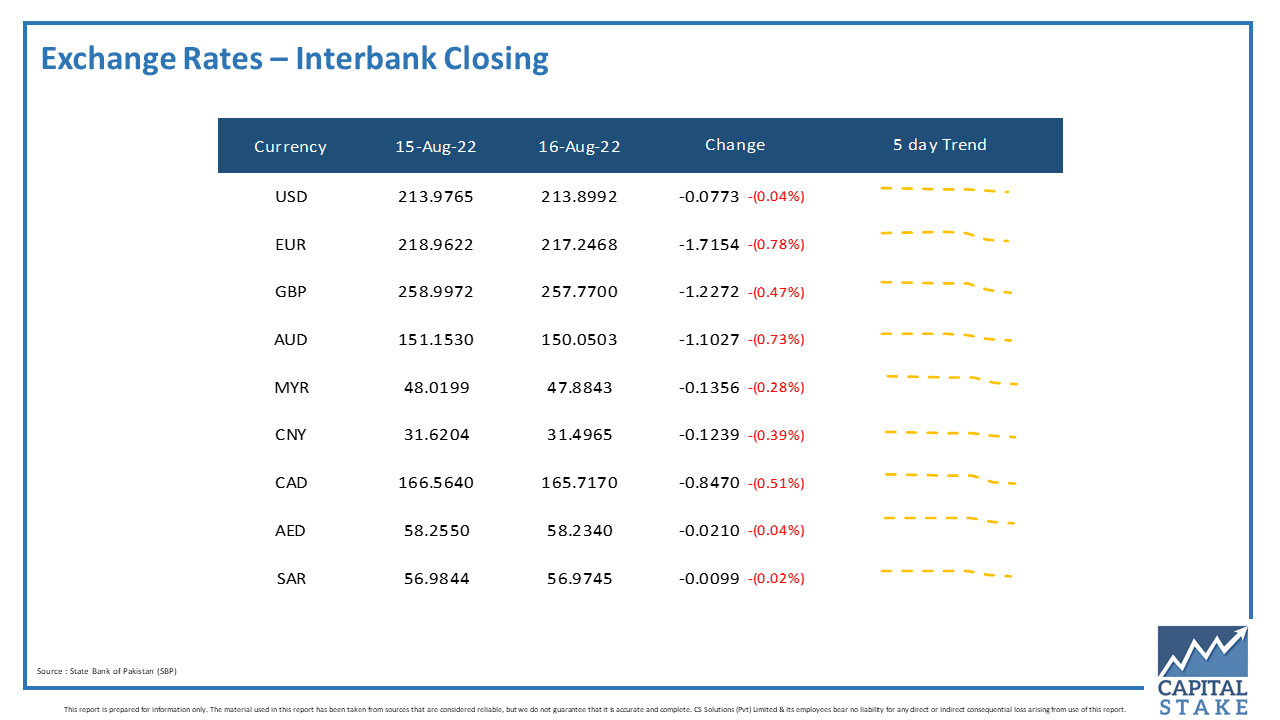 Moreover, it gained Rs. 1.71 against the Euro (EUR) in today’s interbank currency market.

Below you will find the US Dollar to PKR (Pakistani Rupee) Dollar Currency Exchange Rate in Pakistan Today on 16 August 2022 along with the appreciation and depreciation compared to the previous day. The US Dollar rate was Rs. 213.98 against the Pakistani Rupee (PKR) on Monday (15 August 2022) and decreased by Rs. 0.08 today, bringing the new Dollar to PKR currency exchange rate to Rs. 213.90.

Enjoyed this article? Stay informed by joining our newsletter!